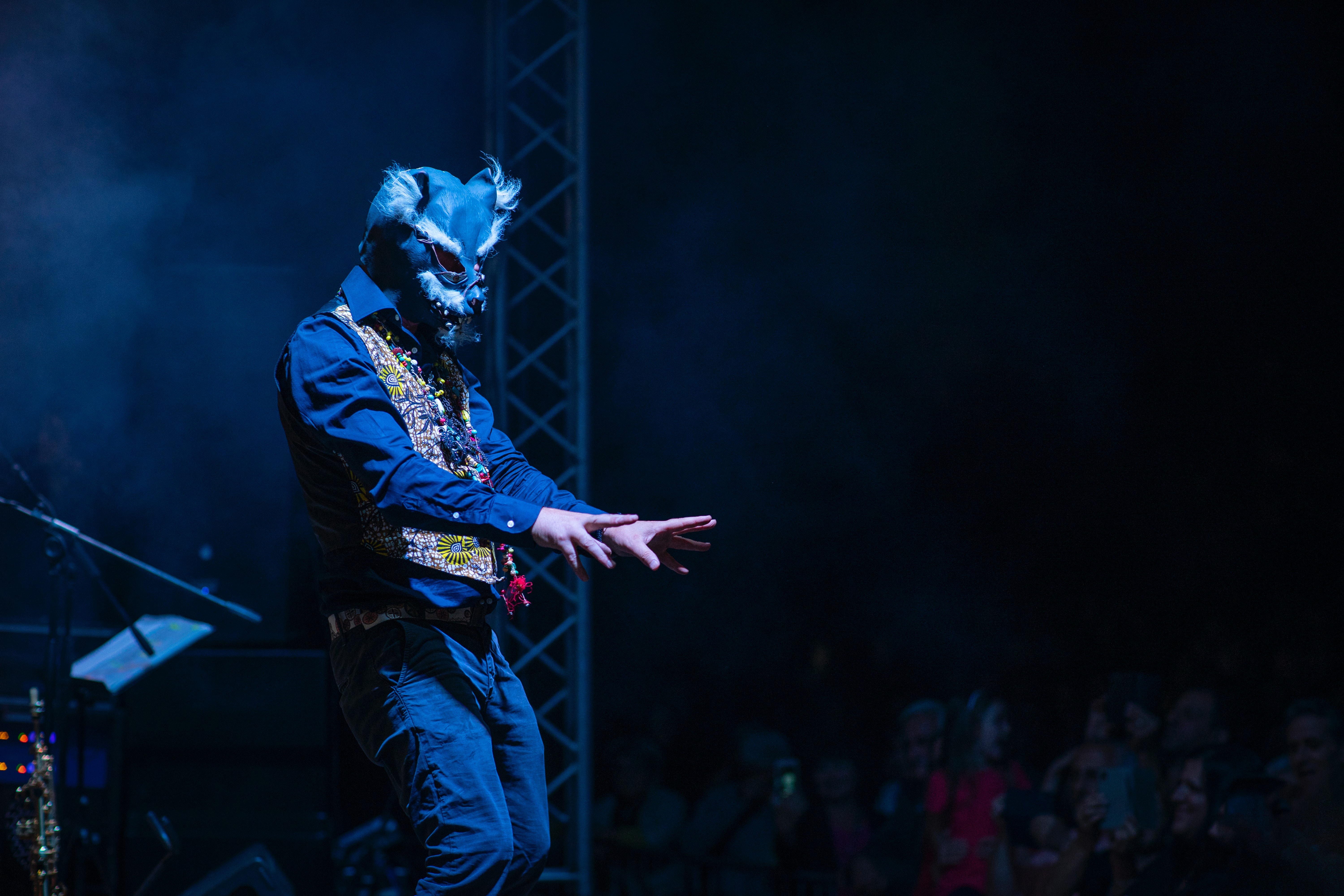 Photo by Samuele Giglio on Unsplash

I’ve played Werewolf (and the variant called Mafia) for years, and it’s a fun social game. However, it can be difficult to get enough people together to play in the same physical location. This post describes how to play Werewolf using a popular online meeting application called Zoom.

A Word of Caution

Werewolf is a game that requires deception and simulated killing. The deception is similar to other games like chess or Monopoly where you often have to hide your true intentions in order to win the game. The killing is similar to dodgeball where you’re figuratively removed from the game (albeit in an often graphically gruesome way). The elements of lying and dramatized murder can be uncomfortable to some players. Some Narrators may want to soften the violent aspects of the game and user terms like “exile” instead of “kill”. 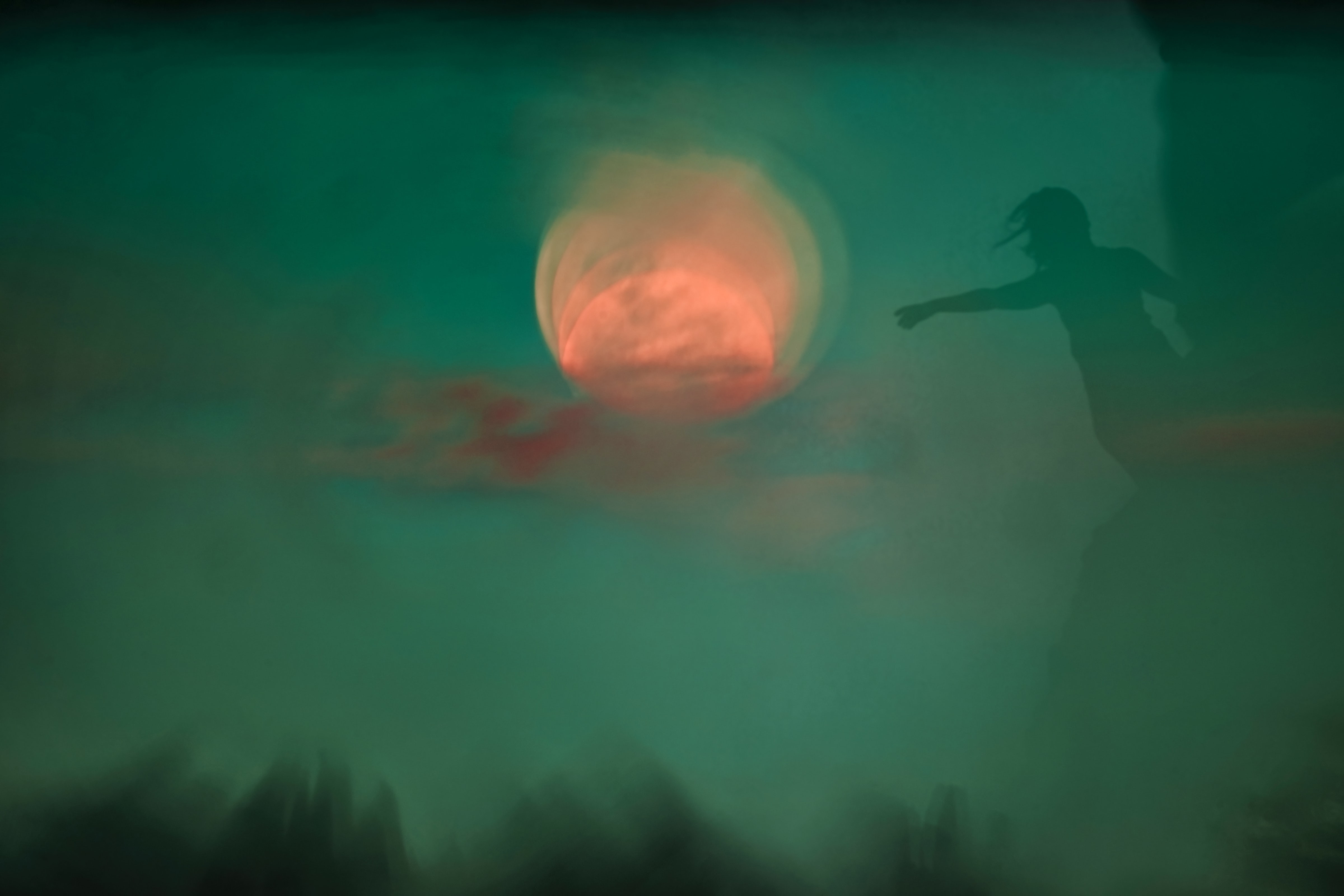 Photo by JR Korpa on Unsplash

This post assumes that at least one person (ideally the person assuming the role of Narrator) has a Zoom account. Zoom has two categories for the people in a meeting: host and participants. The host is the person who owns the account, and the participants are the people who join the host’s account.

Zoom has a Free Plan that provides all of the features necessary to play Werewolf. However, for meetings with one host and two or more participants, the meeting will end after 40 minutes on the Free Plan. Since you need about seven people to play Werewolf, you’ll run into the time limit using Zoom’s Free Plan. So, ideally, at least one person has access to a paid plan to use for the game. However, you should be able to play at least one game of Werewolf in less than 40 minutes so you can play a game, restart the Zoom after time expires, and then have everyone rejoin.

This post also assumes that everyone has access to a computer with a webcam and a high speed internet connection. Whoever has the host account should send the meeting link to the players before the Werewolf session starts so that everyone can make sure it works for them before playing the game.

This guide assumes that all players are not in the same physical location. If you are in the same place as another player, at least go to a separate room.

Before the First Round 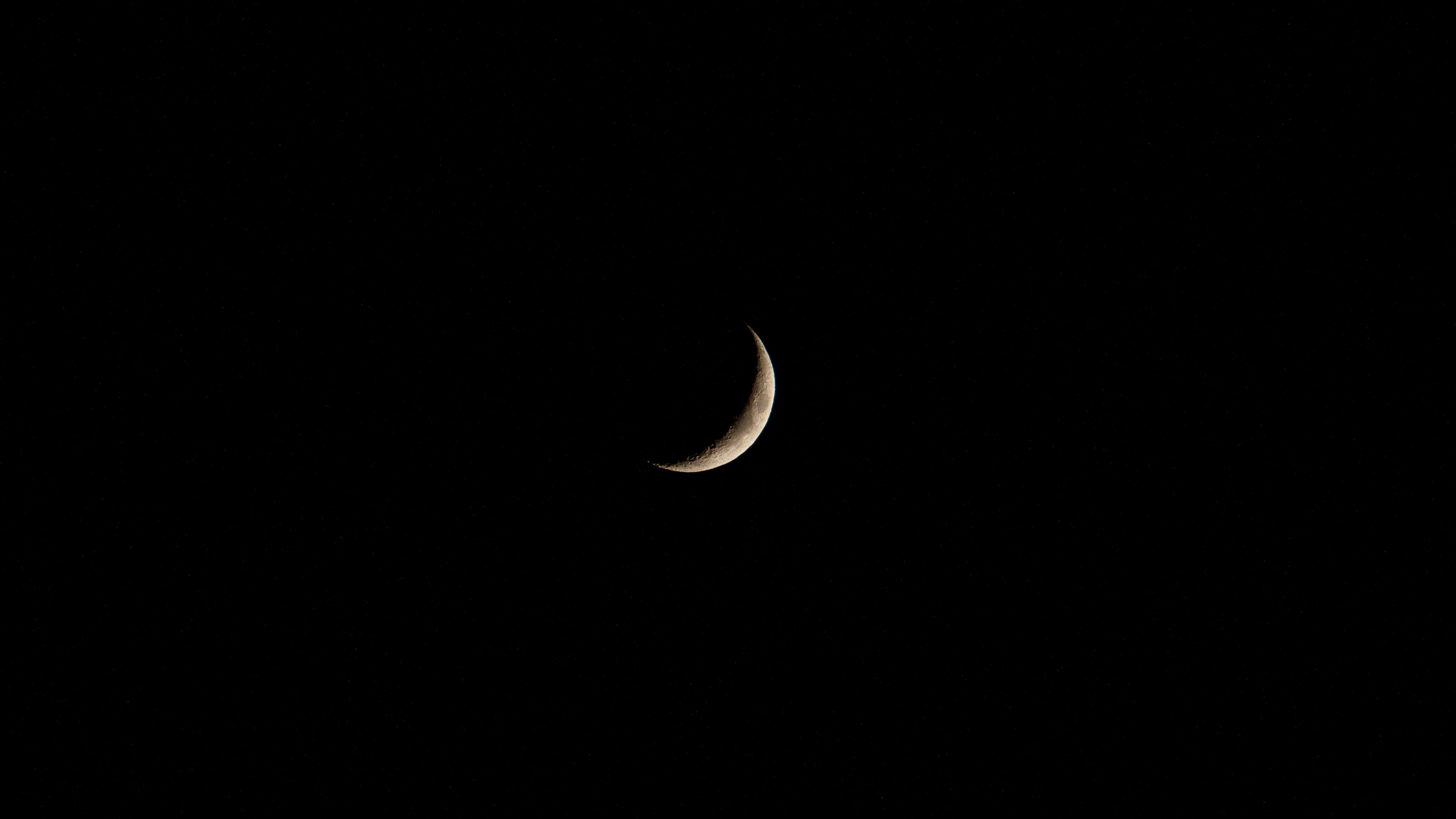 Photo by Tim Umphreys on Unsplash

Before the first round starts, the people playing Werewolf need to complete a few actions.

The person who owns the Zoom account should send the meeting URL to everyone who wants to play Werewolf. This will put everyone in the same virtual meeting room.

Everyone playing Werewolf should start with their cameras turned off and microphones muted. This will reduce the risk of a reaction when the Narrator assigns each player their role.

Make the Narrator the Host

Zoom has a feature called “Raise Hand” that is usually used to let the host know that a participant has a question. For Werewolf, this feature will be used to determine the people who are still in the game. At this point, everyone (except the Narrator) should select “Raise Hand”. The way to do this varies based on the client you’re using to access Zoom, but it’s usually in the Participants List. This puts an icon of a hand next to their name in Zoom’s Participants List window. If people have joined the Zoom room just to watch the game, then the lack of a hand icon distinguishes them from the actual players.

The Narrator should use the chat feature in Zoom to send a private message to everyone playing Werewolf that tells them their role. It’s important that no player share or signify in any way the role assigned to them. There are four roles in the basic version of Werewolf:

You’re a regular member of the town. Perhaps you’re a baker, merchant, or soldier. Your job is to save the town by eliminating the Werewolves that have infiltrated your town and started feeding on your neighbors. Also, try to avoid getting killed yourself.

During the day you seem to be a regular Townsperson. However, you’ve been kissed by the Night and transform into a Werewolf when the sun sets. Your new nature compels you to kill and eat a Townsperson every night. When the Narrator sends a private message assigning this role to you, you’ll also be told the other players who are also Werewolves. How many Werewolves should you have? It depends on the number of players:

Once you get over 20 players, I recommend splitting into different groups or adding additional roles described in Ultimate Werewolf Deluxe Edition (affiliate link). Also, if you have more than 3 Werewolves, it will get tedious using Zoom’s built-in chat feature because that only allows 1:1 communication. It would be best to move the Werewolves into a separate messaging tool like Slack.

You’re a Townsperson with the unique ability to peer into a person’s soul and see their true nature. During the night, you’ll get a chance to see if another Townsperson is a Werewolf. However, use this information wisely because it can lead to you being targeted by the Werewolves the next night if they deduce your identity. There is one Seer per group.

You’re a Townsperson with the unique ability to save lives. During the night, you’ll get a chance to protect another Townsperson from death if they are attacked by the Werewolves. You can choose to protect yourself. There is one Healer per group.

Note: Depending on the number of people playing, the Narrator may elect to assign the roles of Werewolf, Seer, and Healer, and tell everyone else, “Unless I’ve told you otherwise, you’re a Townsperson”. 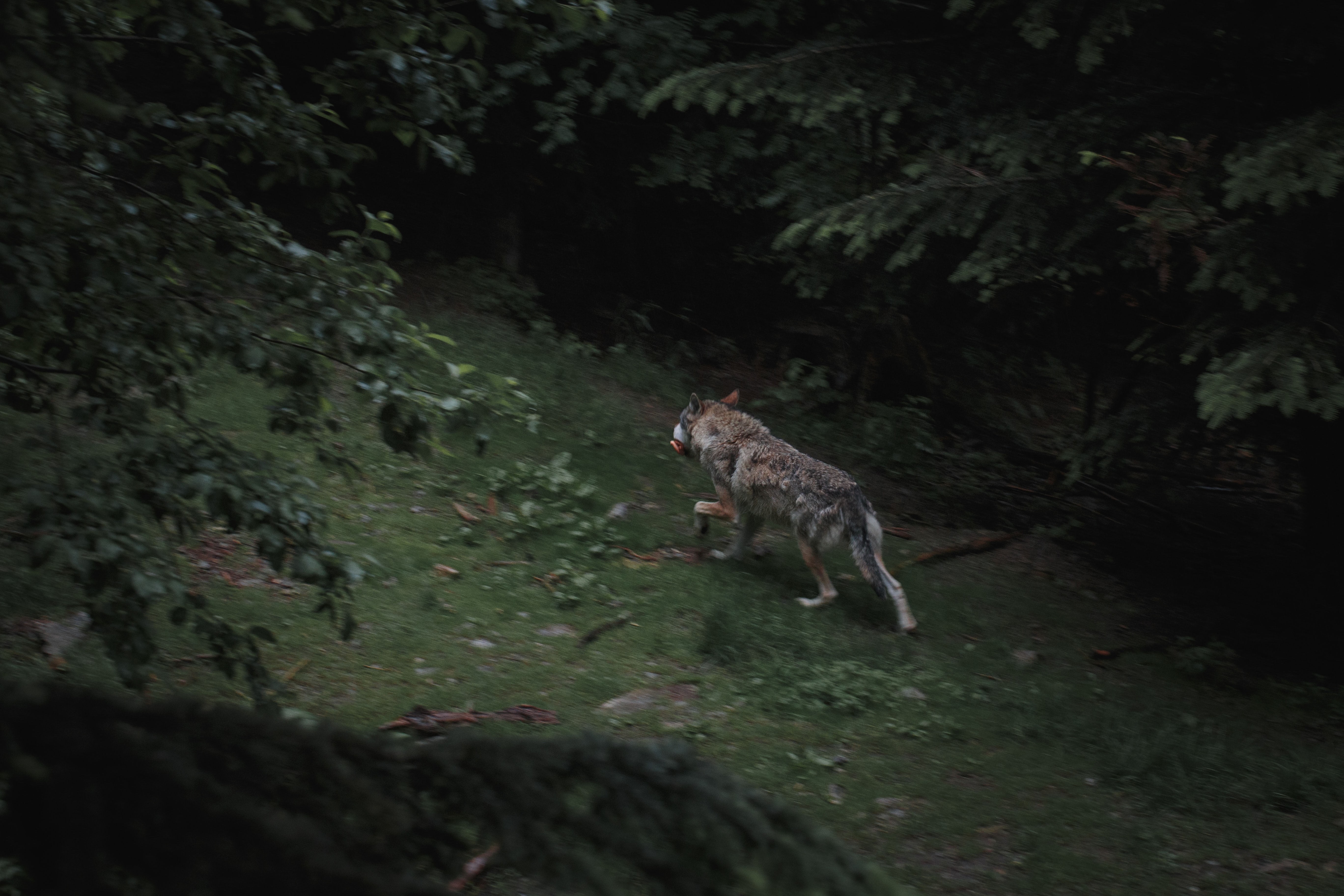 Photo by Jp Valery on Unsplash

The first round starts with the Day phase. Everyone has their camera on in Zoom and the people playing Werewolf have the icon of a hand next to their name in the Participants list.

Optionally, the Narrator can ask the players to introduce themselves. Ideally, the people playing Werewolf will have fun and say something like, “Hi, I’m Peter, and I’ve run the butcher shop in the middle of town for ten years. We’re having a special today, two steaks for the price of one!” No one should disclose if they have the role of Werewolf, Seer, or Healer at this point in the game.

The Narrator should make sure everyone understands how to do the following actions in Zoom:

Once everyone has confirmed that they know how to perform these actions in Zoom, the first Day phase is over.

Only the Narrator can speak at night. All other communication is done using the private messaging feature in Zoom. The Narrator may choose to instantly kill and remove from the game players who repeatedly violate this rule.

The Narrator announces the start of the first night phase by saying, “Townspeople, go to sleep”. Everyone playing the game (except the Narrator) should turn off their camera and mute their mics in Zoom. This reduces the chance that some movement or facial expression will betray a player’s role. The Narrator can confirm that all players have their cameras off by looking at the Participants List in Zoom. Everyone with the hand icon next to their name should also have the “camera off” icon next to their name. 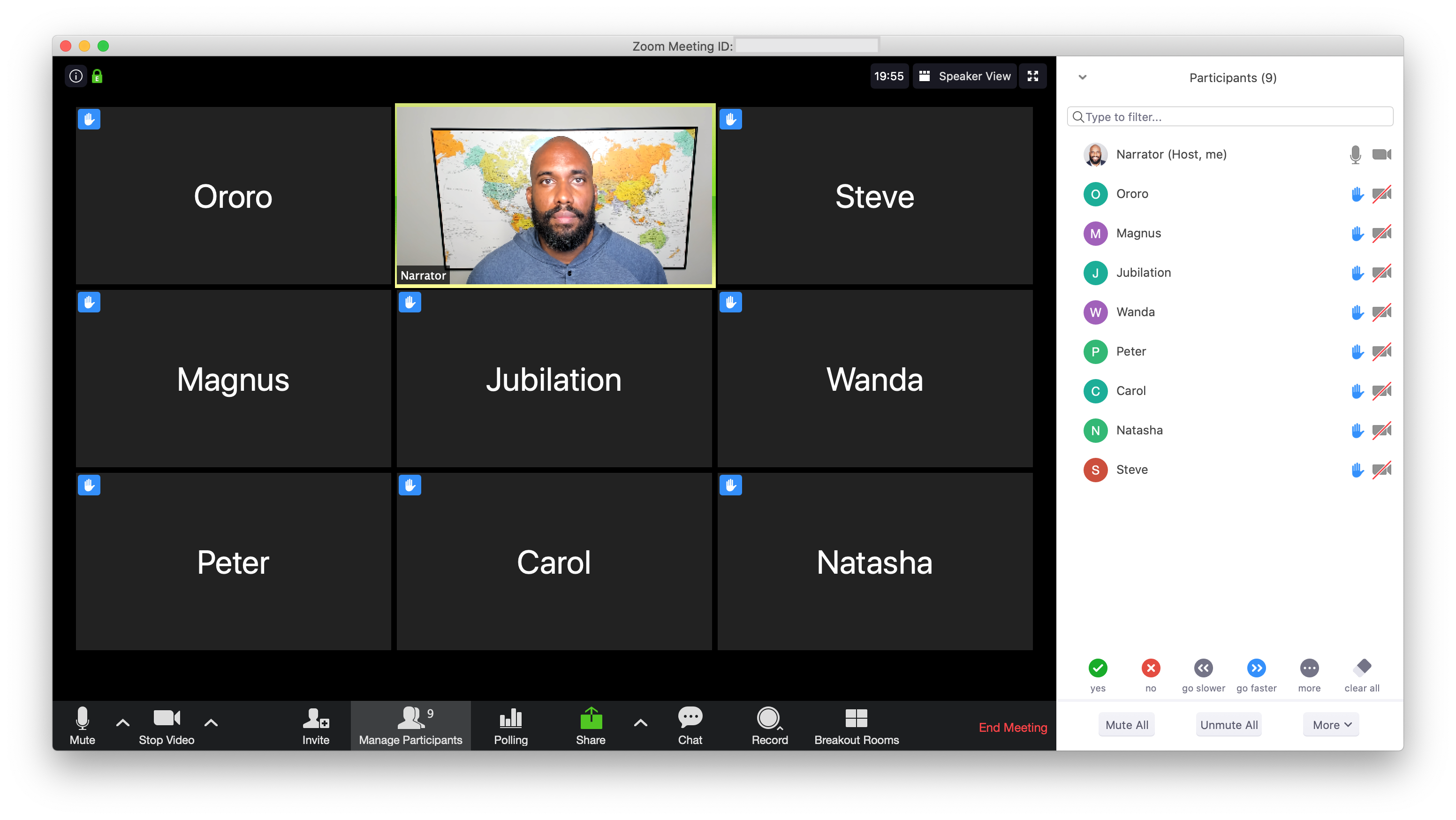 This is the Zoom interface at night with all cameras off (except the narrator) and everyone still in the game with the Raise Hand icon next to their name in the Participants List. Magnus and Wanda are the two Werewolves.

Once all actions have been announced to the Narrator, the first Night phase is over. 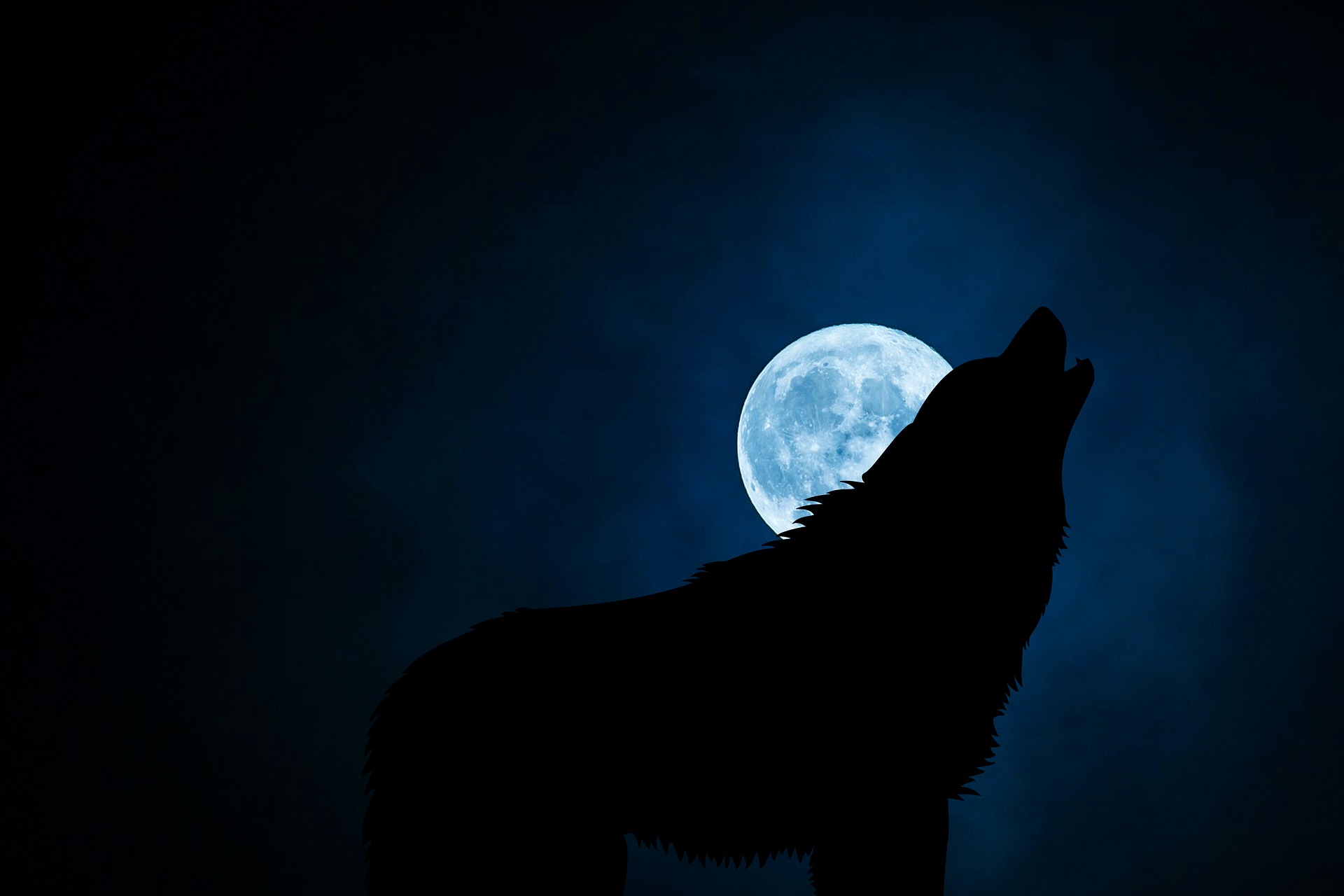 Image by Mohamed Hassan from Pixabay

The Narrator says, “Townspeople, wake up” and all players left in the game turn their cameras back on and unmute their mics. After confirming that all living players have their cameras on, the Narrator begins resolving the actions completed during the night.

An Unprotected Townsperson is Killed by the Werewolves

If the person selected by the Werewolves was not saved by the Healer, then the Narrator announces the death of that player. The Narrator can be dramatic by saying something like, “Everyone wakes up to see a trail of blood leading to the forrest. There you find Peter’s mangled remains by the Great Oak. Curiously, there are deep claw marks in the bark of the surrounding trees. It looks like Peter put up a fight.” Once someone is dead, they lower their hand to indicate in the Participants List that they are no longer in the game. Dead players can keep their cameras on during future Night phases. It’s important that dead players say nothing once removed from the game. They shouldn’t announce their role, thoughts about who the Werewolves are, or share any information. The Narrator may mute them or remove them from the Zoom room if necessary.

A Protected Townsperson Was Attacked by the Werewolves

If the person selected by the Werewolves was saved by the Healer, then the Narrator announces that someone was attacked last night, but they survived. No other information is provided to the players.

Discussion by the Townspeople

After resolving the Night actions, the Townspeople have to decide what to do. This is a free discussion period, but the Narrator may put a time limit on how long the players have to talk.

If a Townsperson is accused of being a Werewolf by at least one other person, the Narrator will ask for a vote on that accusation. If the majority of the other players agree, then that person has the opportunity to defend themselves. The Narrator may put a time limit (e.g., 30 seconds) on this defense. Once the player makes the case for their innocence, the Narrator asks for a vote on the execution of that player. If the majority of the other players still agree, then that player is killed and is no longer in the game. That person should lower their hand in the Participants List to indicate that they are no longer in the game.

The Seer or the Healer may elect to reveal themselves during the Day phase. For example, the Seer may share that they identified a Werewolf. Or, the Healer may reveal that they saved a player from being killed by the Werewolves.

Players without the Seer or Healer roles may pretend to be those roles in order to confuse the Townspeople, especially if they are actually Werewolves.

The Townspeople may determine that they do not want to execute anyone during that particular Day phase. However, this gives the Werewolves more time to kill Townspeople during the Night.

Whether or not there’s an execution, the Day phase is followed by another Night phase. Even if the people with the Seer and Healer roles are killed, the Narrator should continue to prompt them for actions during the Night phase. 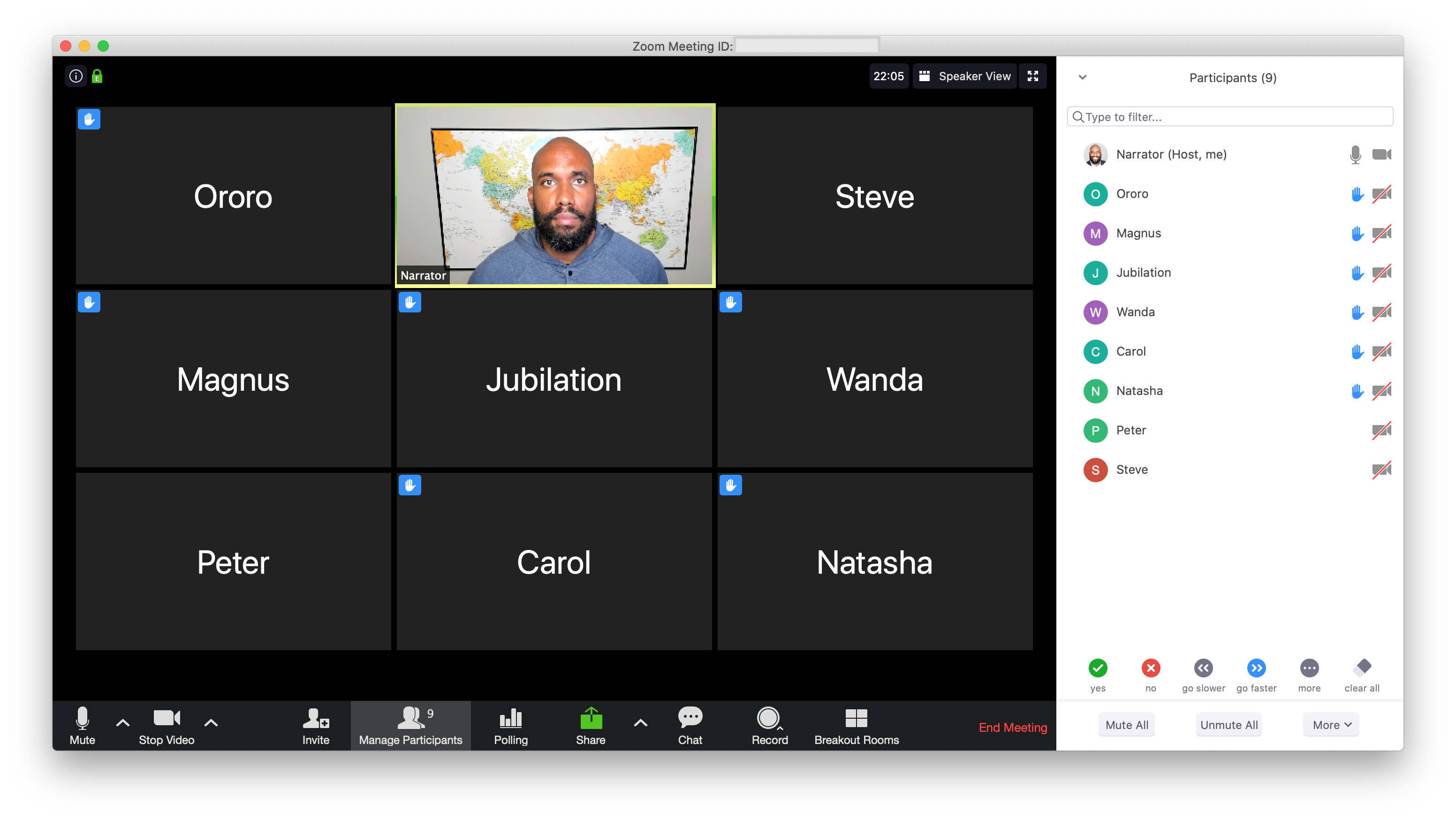 This is the Zoom interface at a later night phase. Peter and Steve have been killed off by the Werewolves so their hands are lowered in the Participants List.

Photo by Rudolf Kirchner from Pexels

The Narrator may allow the players to reveal their roles once the game is over. 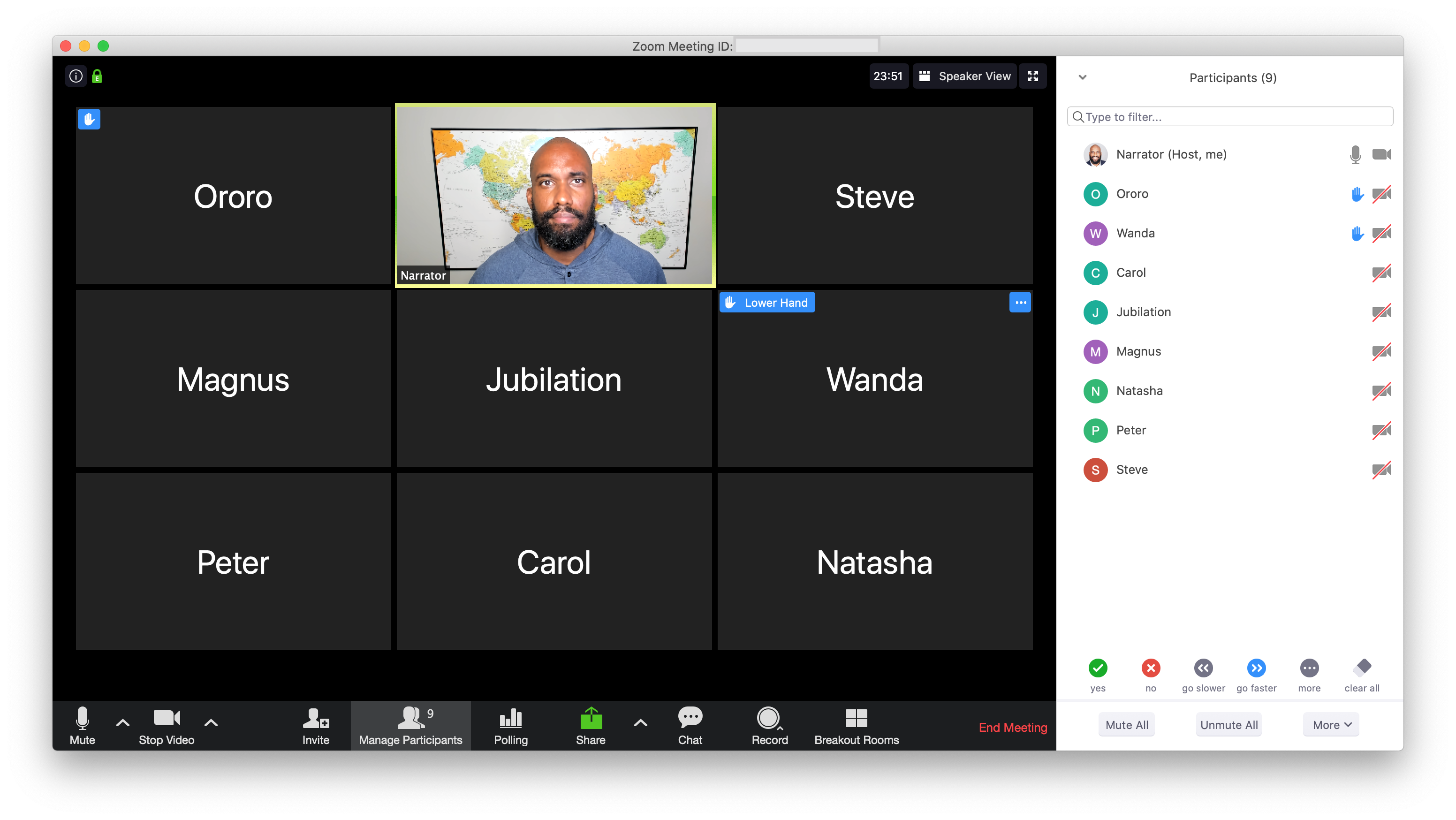 Werewolf is a fun game that you don’t have to wait until you get people in one physical location to enjoy. By using Zoom, you can play the game remotely and still have fun!

Note: Some of the links in this post are affiliate links which will send a small commission to me if you use them to make purchases.